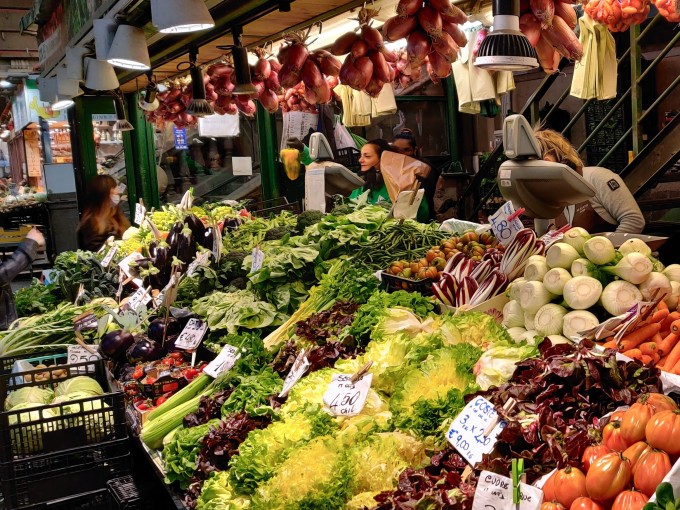 genua is a city where you should not stay hungry for long. Nestled between the Mediterranean Sea and the Apennines, the port city is ideal for a culinary stroll. Counters filled with all kinds of pies, pizzettes and donuts can be found in the so-called “Sciamaddas”. The Mercato Orientale on Via XX Settembre, inaugurated in 1899, is the main attraction for foodies. The lush market harkens back to when Genoa, also known as “La Deliziosa”, was a major hub for the spice trade.

The most popular snack in town is focaccia. The Romans once called the flatbread panis focācius because it was baked in the ashes of the oven. “Focaccia is a common part of Genoese breakfasts,” says Chiara Piccardo, manager of a guest house in the historic center from Genoa. In addition to farinata, a cake made with chickpea flour, water, salt and olive oil, served with cheese or olives; Torta Pasqualina, also known as Easter cake, with cooked chard or artichokes, zucchini, spring herbs and cheese; or pumpkin pie with parmesan and ricotta. “But I really like showing my guests how I make focaccia,” says Piccardo. “We Genoese like to have it with our cappuccino.”

“Soft wheat flour type ’00’, water, lard, extra virgin olive oil, salt, malt and yeast are the ingredients of the traditional focaccia”, reveals Graziano Bargi, owner of the Panificio Mario bakery in Via San Vincenzo, opened in 1938. . The dough is left to rest for about 30 minutes, then placed on a greased baking sheet and rolled out to its full size. About a glass, half water, half extra virgin olive oil mixed with a tablespoon of salt is then poured over the surface of the dough and spread well. Bargi then presses into the dough with his fingertips to form the characteristic holes that give the focaccia its crunchy texture. Then the focaccia is left to rise until it has almost doubled in size and finally baked at around 220 degrees. Focaccia is often garnished – for example with olives, cherry tomatoes, onions or cheese.

In addition to the centimeter-high focaccia with its golden crust, other Ligurian pastries such as pizzette, vegetable tarts or salatini can also be found in Graziano Bargi’s bakery. Bargi’s family did not found the bakery, but only took it over in 1968. This did not detract from their success. “Ultimately, it all comes down to the skill of the baker,” says Bargi.

Like Bargi, Luciano Pirlo is an expert in the preparation of focaccia. Pirlo runs the delicatessen Pestobene on Via San Pietro della Porta. Proofing and kneading are especially important for good focaccia, he says. Pirlo’s specialty is piesta, a pesto focaccia. He recommends trying them with a Ligurian white wine, a Pigato or a Vermentino. The ingredients of classic pesto – basil, olive oil, parmesan, pecorino sardo and pine nuts – give the focaccia a full-bodied taste. At Pestobene, the pesto is prepared in the display case: the ingredients are carefully pounded in a mortar using a pestle.

After a visit to Pirlo, if you stroll along Rue Pietonal to the fishing district of Boccadasse, you will finally arrive at a quiet beach lined with colorful houses. Of course there are also snacks here. A cheese-filled focaccia di recco with a cold beer is perfect for a lunch break or a picnic at the beach, especially on sunny spring days. The taste of focaccia will remain in the soul for a long time even after returning from Genoa.