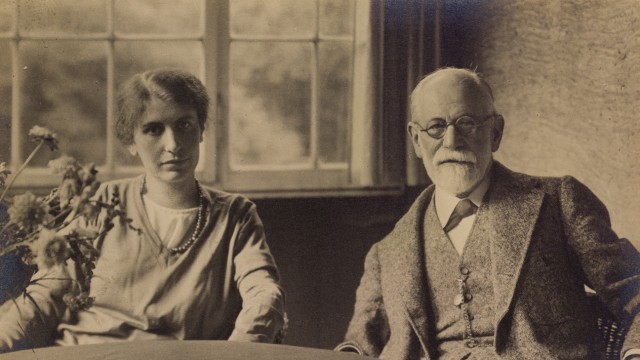 There is a nice anecdote from Billy Wilder about his attempt to interview Sigmund Freud as a young journalist in Vienna. It was around 1925 or 1926, Wilder later recalled in an interview. He went to Berggasse 19, where the famous doctor first made him wait in the living room. Then Freud came home from lunch grumpily, still tied up with his briefcase, and, annoyed, asked if he was a journalist. When Wilder said yes, Freud, who didn’t like journalists, immediately kicked him out with the words, “Here’s the door!”

Leaving the apartment, Wilder was still able to take a look at the legendary sofa in the treatment room, which seemed unusually small to him. The joke, which he couldn’t miss in retrospect in revenge for being kicked out: “All of Freud’s theories were based on the analysis of very small people.”

Freud was a gifted storyteller, but he still preferred to throw journalists

Too bad the interview didn’t take place. Because a conversation between Billy Wilder and Sigmund Freud would of course have become required reading around the world. But Freud hated questioning, even though as a narrator (at least in writing) he was a gifted entertainer. You don’t have to agree with him on everything, but his books, especially cultural and theoretical writings such as “The Uncanny” or “The Discomfort in Culture” are always entertaining and rewarding reading.

Because there are not too many interviews with Freud, but he himself is the best narrator of his biography, the French director David Teboul used only original sources for his documentary “Sigmund Freud “. He didn’t want to make a film about Freud, but with him. To do this, he draws on his writings, but especially on his many correspondences with his family, his friends, his colleagues and his disciples. These texts, read by Austrian actor Johannes Silberschneider, are supplemented, among other things, by letters from Anna, Freud’s daughter, read by Austrian actress Birgit Minichmayr.

Anna was a loyal student and chronicler of her father. In her letters, she recalls major advances in psychoanalytic work and decisive biographical experiences. But she also remembers many beautiful little things that bring a person to life. Like the smell of cigars, for example, that wafted from his father’s office late at night when he finally called it a day at the end of a long day.

Anna, who later continued Freud’s legacy as a psychoanalyst herself, also has the following line: “My father always said that biographers were liars…” In order to do Freud justice at his In this way, the director David Teboul therefore approaches his protagonist as the psychoanalyst approaches the problem of his patient: by way of free association.

Freud’s letters and other primary sources are illustrated with images of turn-of-the-century Vienna, rare non-romantic archival photographs, and even rarer photographs from the life of the Freud family, some of which have not not yet shown. At times it feels more experimental than documentary, with images of late 19th century mountaineers, like psychoanalysts, rushing into the great unknown of mountain ranges in search of discoveries. But it also goes well with the subject.

The film provides no startling insights or revelations about Freud’s life and work. But since Freud, to put it mildly, is one of the best-studied figures of his time, that need not be the expectation. If you want to know the finer details, you still can’t avoid the legendary nearly 1,000-page biography of Freud by German-born American historian Peter Gay. Due to its experimental approach, the film is nonetheless exciting to watch for both newcomers and Freudians alike.

Director Teboul has already produced various biopics, for example on Brigitte Bardot and Yves Saint-Laurent. He has the sense to classify his protagonists in their eras. Show how the world in which we are immersed as a small human being, without being able to influence time and place, becomes the point of friction of any work.

Although Freud had already completed “The Interpretation of Dreams” earlier, he did not publish it until 1900 because he was aware that with this work he would usher in a new era, which should also be reflected in the date of publication. Of course, what he could not foresee was the cultural rift of World War I and the rise of National Socialism in the decades that followed. The film clearly shows how his life and work changed throughout history. The shift from the primacy of sexuality in his teachings to the powerful force of the death drive in human action. He himself described this change of mind as a “marriage of convenience” with his “dark theories”. The film also addresses Freud’s relationship to religion, in particular to Judaism.

To protect your privacy, it has not been uploaded without your permission.

I consent to YouTube content appearing to me. Personal data is thus transmitted to the operator of the portal for analysis of use. You can find more information and a possibility of revocation at sz.de/datenschutz.

This external content was loaded automatically because you accepted it.

Revoke consent and reload the page

Most impressive, however, are the recordings of the late Freud in the late 1930s, driven into exile in London by the Nazis. He is already terminally ill in these film recordings. The palate cancer had already spread relentlessly and caused a putrid smell that drove his beloved dog Yofie away from him. The flight from Austria was a burden that Freud could barely bear physically. But the will to die in complete self-determination and without self-pity not in a dictatorship but in freedom was stronger.