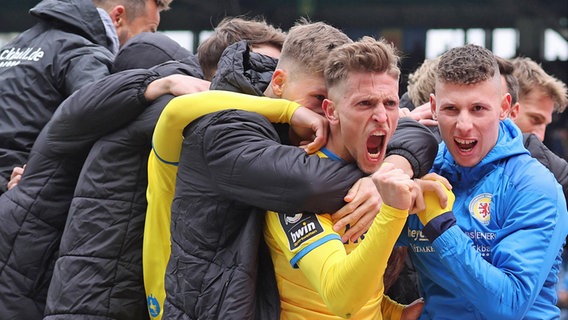 When the ball rolls, Michael Schiele is right in the middle instead of just there. Always focused, always energized, the Eintracht coach is very close to his team. Freaking is expressly allowed! Like, for example, after the last-minute winning goal against Havelse in early April. The 44-year-old fell to the ground as he celebrated Jan-Hendrik Marx’s stoppage-time goal before Schiele crashed into the blue-yellow ‘Löwen’ group.

The 3:2 was the starting signal for Braunschweig’s final push of the season with three more straight wins, at the end of which there will most likely be direct promotion to the second division. Still missing a win Saturday at SV Meppen, the Braunschweigers have their first chance to crown their great season.

With a victory, Braunschweig is in the second division – the third division game at SV Meppen on Saturday from 2 p.m. live. After

Emotional on the sidelines, meticulous behind the scenes

Coach Schiele is the father of success and is still part of the “Lion” pack. Emotional on the sidelines, meticulous behind the scenes and clear in his footballing ideas – Schiele seems to have been a fluke for Braunschweig last summer.

“Finding the right coach is not easy. We appreciate the mentality and attitude of the team and were also looking for a coach who shared those values,” chief executive Peter Vollmann told NDR.

“He’s very fair when dealing with the team, but he also makes it very clear to the players what the deficits are. Not everyone can do that and to some extent that’s what we absolutely needed. “
Managing Director Vollmann on Coach Schiele

Schiele, who has signed a contract with Eintracht until 2023, is leading the way. “The discipline that the coach embodies has transferred to the team and contributes to unity,” Vollmann said.

The coach would never congratulate himself for that. He prefers to convey praise. “We act as a unit on the pitch. At home, everyone is there for each other. The team has a very good character.”

GSN data shows that the 44-year-old is also doing a very good job on the sidelines. Schiele’s win rate in the Third Division (137 games so far) is 49.64%. He averaged 1.72 points per Third Division game – 0.26 more than would have been expected based on “expected points” (1.46). Born in Heidenheim, he gets more from his teams than is theoretically possible.

This was the case of the Würzburger Kickers, which the former professional coached in the second division in the 2019/2020 season, and which can also be seen at Eintracht at the moment. From a tactical point of view, the improver from Braunschweig lets his “lions” play attacking football with ball possession in a 4-2-3-1 system – according to data analysis, the ideal formation of the Eintracht. “Furthermore”, he has carved out his squad for efficiency – 26.53% converted chances is the highest value of the current Third Division season.

Is there more? The numbers say “yes” to Schiele. With a GSN rating of 59.71, the 44-year-old is on the edge of Bundesliga suitability in terms of data.

Coach Schiele seems destined for higher things. And let it be the second Bundesliga with its “lions”. “Eintracht Braunschweig should aim to become a stable second division team again in the medium term,” says Schiele. Finally, the data shows the 44-year-old can shape the traditional club.

The GSN trainer index is made up of different factors. have relevance:

Eintracht can make the second division promotion perfect on Saturday at Meppen. As many “lion” fans as possible want to be there. After

The most important questions and answers about the cooperation between NDR and GSN. After