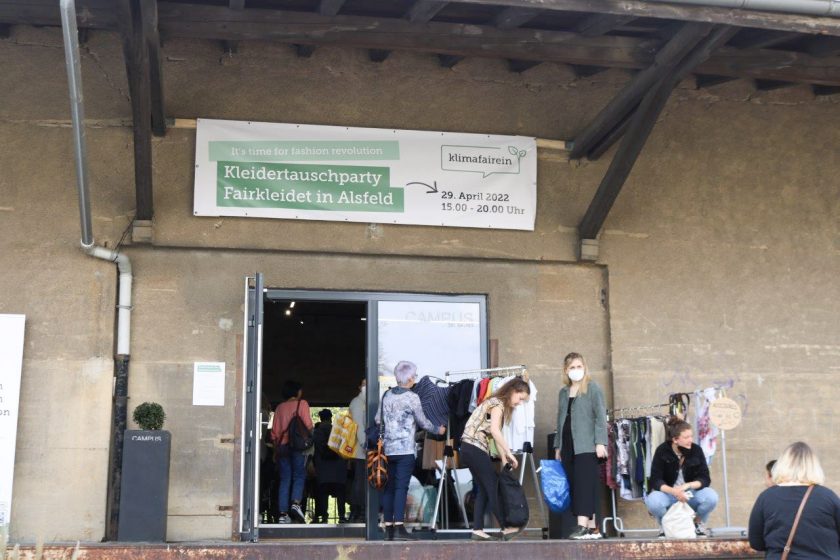 ALSFELD (above). Last Friday, Vogelsberg’s first clothes swap party was very popular and received a lot of positive feedback. Under the motto “It’s time for a fashion revolution”, quite a few clothes changed hands in the former freight station in Alsfeld.

‘It’s time for a fashion revolution’ – With these words, Dr. Sabine Schmalz, Managing Director of klimafairein, participated last Friday in Vogelsberg’s first clothing swap party, at which Mayor Stephan Paule also assisted. Finally, it took place in Alsfeld, around the freight station, supported by its owner Frank Galfe and the external coordination center “Tolerant Alsfeld” of the federal program “Democracy Life”. Frank Galfe was open to the idea of ​​the clothes swap party from the start, Schmalz reported, as he himself was on the sustainable path of fair fashion with his fashion made in and around Alsfeld.

And according to klimafairein’s press release, that’s exactly what the clothes-swapping party was all about, which took place on “Fashion Revolution Day.” It was launched on April 24, 2013 after the serious accident at the Rana Plaza textile factory in Bangladesh. The factory collapse killed 1,136 people – mostly young women – and around 2,500 were injured. The disaster quickly became a symbol of degrading and dangerous working conditions in the global fashion industry.

Clothing is not disposable

This party in Alsfeld also aimed to show that fashion can also be different, that it can connect, create encounters and that we can deal with it responsibly: “Today I put a cardigan that I bought years ago in Lauterbach,” Schmalz said in his short opening speech. “I imagine who was involved until I bought them: the knitter, the seamstress, the packer, the carriers, the sales person to name a few. We are all bound by this garment and maybe someone new will join our party today. 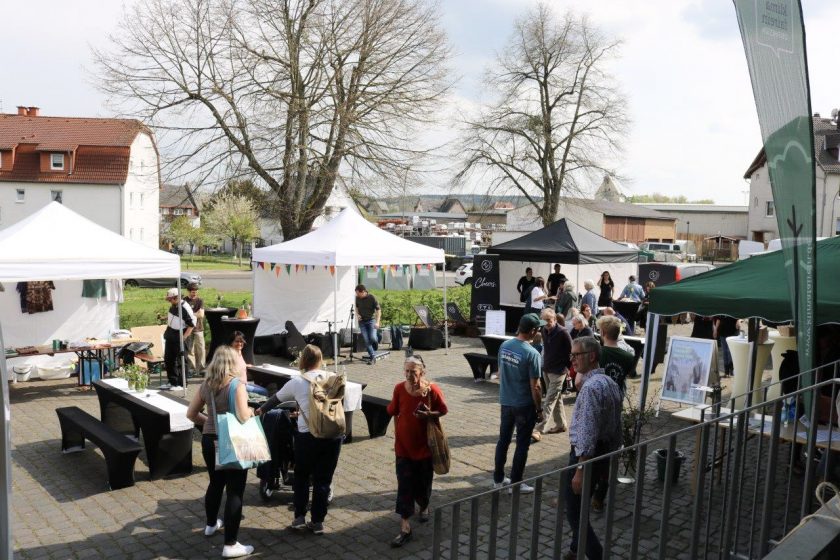 The offer in the courtyard in front of the freight station was also well attended and well received. Photos: klimafairein

With these thoughts, klimafairein would like to shift the focus from clothes as disposable goods to more appreciation: Almost 400,000 tons of clothes are thrown away every year in Germany alone. Not only is wearable clothing often still an aspect of consideration, but also water consumption associated with production and CO2 emissions. Added to this are the working conditions of seamstresses in sewing metropolises such as Bangladesh.

An exhibition organized by the association described the usual route of clothes before they are, for example, in stores in Vogelsberg or delivered to wardrobes from the Internet. There were tips on ecological washing and saving plastic on a daily basis. All this in the form of discreetly available offers. Because joy and good humor were the focus of the day – as it should be at a party.

With the tailor training department of the Max-Eyth-School, klimafairein had an interesting partner on board, who presented their craftsmanship under the bright spring sun in the courtyard of the freight station. Right next to it, you could embellish your newly exchanged T-shirts with a screen-printed logo, Auhof – the ice cream maker from Vogelsberg – tempted by its products. 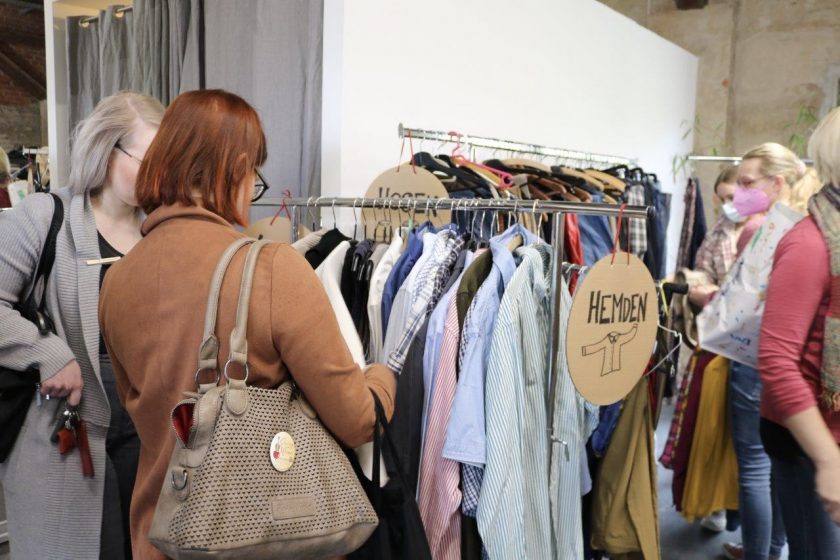 There was a lot of activity between the clothes racks – after all, there was good fashion for free.

Further culinary delights were offered by the Lauterbacher zweibar team as well as the klimafairein trade fair sales car, which presented itself to the party guests. Lovingly decorated, awarded by the weather gods and filled with the best folk music by Gerry Galvin, this place was the place to be in the Vogelsberg on Friday, especially since there were still many, many beautiful clothes that were gone as quickly as they were delivered.

The system of the clothing exchange party is very simple: guests could deliver up to ten pieces, a quick check and less than five minutes later, the pieces were carefully sorted on the stands of the sale room of Campus … in the Modehaus. Where the high-quality collection of the Galfe siblings is displayed, everything was free that day. Come in, look, take away. Everything was unbureaucratic and without much effort, because there was no kind of accounting: what was left was donated to the association “Alsfeld fulfills the desires of the heart” and the initiative for the homeless “La Strada” the same weekend.

A step in the right direction

The welcome is immense, the guests come and go, the stock of jackets, trousers, dresses, blouses, shirts, T-shirts and accessories is renewed several times. Visitors heard only good things that day: “We were expecting something like this”, they said, because most people know that “fast fashion” has no future, even if ‘they often act differently. If it is then at least guaranteed that the clothes are not thrown away but worn several times, then for many this is a step in the right direction.

Therefore, of course, people who had brought nothing with them could choose clothes, hang around and take them with them. The cooperation with companies and institutions in Vogelsberg has also been very positive. It is obvious that in this atmosphere and with this good atmosphere, meetings and exchanges were not left out. At the end of the day, only one question remained: when is the next clothes swap party? 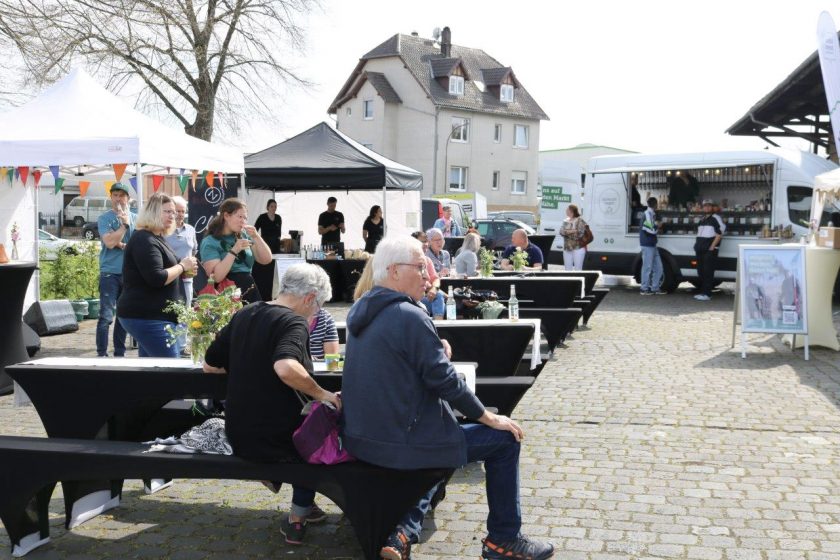