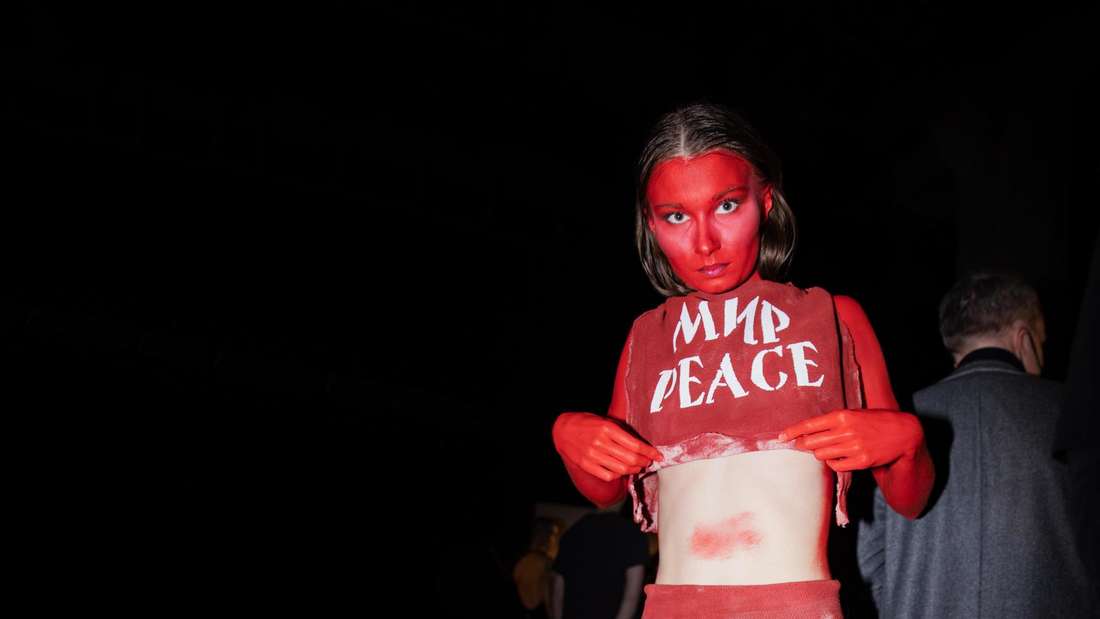 Berlin Fashion Week is a regular appointment for our graphic designer Judith Kohl. Your insight into top shows and catwalk politics

And again, everything was different from what was expected at Berlin Fashion Week. Although people have become accustomed to the corona pandemic and the way it is handled, in March the Russian war in Ukraine also overshadows the event.

After all, the parades took place – and there were impressive declarations of solidarity with Ukraine on almost every catwalk. “Don’t talk about fashion, but through it” was the unanimous motto of Berlin Fashion Week, also signed by fashion designers from the affected country. But the war also remained an off-track issue. To cite just one example, Ukrainian designer Ewa Herzog set up an aid convoy to her home country – with the help of her Austrian colleague Marina Hoermanseder, among others – to distribute in-kind donations locally. which he urgently needed.

Fashion week organizers also called for fundraisers – and showed up without further ado in the national colors of yellow and blue. Under #standwithukraine, the fashion world is more political than ever.

The final show was turned down by Jean Gritsfeldt – but unfortunately not in person. Neither the Ukrainian fashion designer nor his collection could leave the country. On the initiative of the German “Fashion Revolution” team, more than 20 volunteers and supporters came together to sew Gritsfeldt’s models under his direction (via video call)!

A statement collection that had nothing to do with new looks, but reflected the current situation in Ukraine, was seen on the catwalk. The show opened with a model dancing, squirming and contorting on the catwalk. Previously, the news of the war was remembered in an audiovisual way – a moment of goosebumps.

The designer abandoned his original creations when the situation in Ukraine became increasingly critical. Now it’s about feeling protected, feeling warm. The garment must be comfortable, it is more a functional garment than a fashion one: loose tops and pants, loose and roughly cut dresses in grey, black and white, all in jersey, printed with slogans in Ukrainian and English (Love, Liberty, Voice, Light, Peace…), who want to be an armor against the unbearable situation. One look is particularly impressive: a model in a simple tied top and tight, slit midi skirt, painted from head to arms and across the upper body with reddish-brown paint that drips down to the hem of the skirt. .. A striking spectacle that will last a long time the memory will remain. Jean Gritsfeldt at MBFW Berlin.

The Finnish fashion designer and winner of the 2021 sustainability award at the prestigious Hyère fashion festival opened Mercedes Benz Fashion Week with her show. She featured clothes that were unusual in terms of craftsmanship and design. His technique: constantly creating new silhouettes from individual modules. The so-called squares are joined in different ways using buttons and loops.

This is how a wide variety of dresses were born: with voluminous sleeves and sleeveless, wide and tight, with different necklines and high necks, opaque and transparent… always ankle-length and monochromatic, but sometimes in bright colors. A successful start to the fashion week and a collection that arouses curiosity for what can still be created from Sofia Ilmonen’s modular system!

At the beginning there was the story of “Claudette and Rico – a love between the moon and the asphalt”, which the designer himself invented. The result was a collection that was not only presented, but also made audible.

A range of freely interpreted boxing outfits (Rico) and princess dresses (Claudette) took place on the catwalk, which differ from the respective scheme – like the protagonists of the story themselves: dresses where the side parts of the skirt is missing. Coats and jackets swept back and forth. Unusually deep necklines in men’s suits and overalls. Pizza box-style purses and backpacks because the princess has a penchant for fast food. Long, wide hooded coats with a hood, inspired by boxer coats. This is how the peculiarities of the invented characters took shape on the catwalk.

This time, the designer has invited himself “home”, so to speak. His eponymous show “Host” took place at the Hamburger Bahnhof Museum. The Rieckhallen have been redesigned in the entrance, living room and above all the dining room to welcome guests. A long table was furnished with wonderfully different chairs and lined with crockery, flowers and candles.

The collection that was then served was also sovereign: the typical layering with ever-changing forms of workwear. Modern interpretations of evening wear with cropped spencer jackets and cropped tops. The interior theme was continued with brocade fabrics and details such as fringes and beads on garments. The unisex collection convinces with a successful interplay of known elements and new pieces as well as the combination of different textures and materials.

The design duo, consisting of Jale Richert and Michele Beil, are known for an inclusive approach to fashion – not only in terms of the fit and fit of their models, but also in terms of their model selection. Stereotypical beauty ideals and viewing habits are shattered by challenging and deconstructing gender role differences.

They surprise again and again with extraordinary presentations of their collections. This was also the case last Friday: the label had its audience as part of the Studio project

2Retail took them behind the scenes at Fashion Week and showcased their fashion digitally. For more than six hours, you could look over the shoulder of Richert Beil’s team preparing for a fashion show and get a glimpse of the intricacy of such productions. The result: eight key looks.

She is old fashioned in a charming way. She knows her clientele, stays in touch and likes to personally address the audience before and after a show. The Mainz native’s fashion isn’t too ambitious either, it should fit well (in all sizes!), be comfortable and flirty. All in all, nothing wrong in itself. This approach certainly has its merits, but it’s not necessarily something for fashionistas.

With the FW22 collection, presented in the lobby of the Hôtel Adlon as in previous years, she surprised everyone again. Extraordinary and wide sleeves; wide and cool pants; tight armor on the chest and shoulders. Classic patterns (fine stripes, checks…) in modern silhouettes and cuts, overlays. It stays true to its maxim of portability and comfort, but in a contemporary way. I would love to have more!