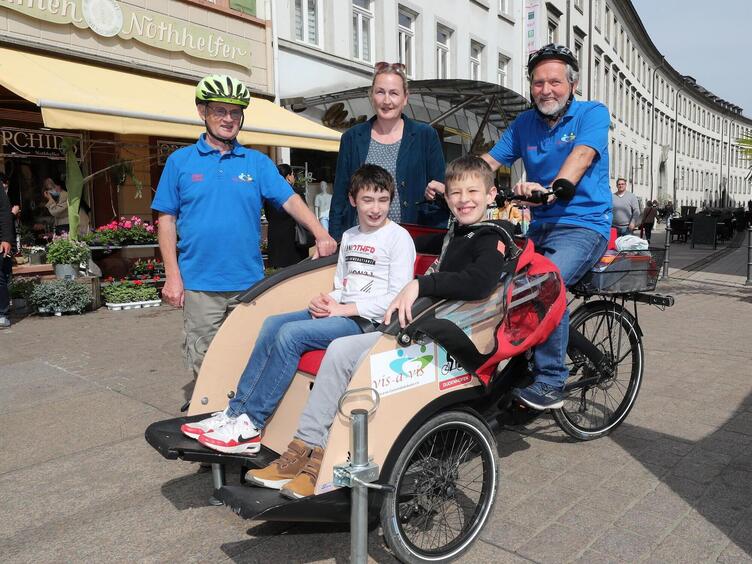 A lot happened in the streets of downtown Speyer last week: while in one place people were campaigning for the social participation of people with disabilities, a few cobblestones further on it was fair fashion. Speyer seniors tried in a completely different way to make the world a little better.

Blouses aren’t usually 16-year-old Anaya’s first choice. Not at all in the color red. But on Saturday, everything was different. She liked that. Along with ten other women ranging in age from 13 to 79, she wanted to give others a different perspective on clothing. The Weltladen in the Korngasse has become the stage for this.

Presenting ecological and fair fashion is what the committed participants wanted. And, as co-organizer Ingrid Blank points out: “We want to show how attractive she can be. She was in good spirits about the reactions that followed. “There’s a questioning going on right now,” Blank said.

Fair fashion has long been an important topic for Regina Huwe-Wittmann, also in everyday life. “I’ve been working in the boutique of the world for almost 30 years,” she said at the fashion show on Saturday. Solidarity and the desire to pass on to others the passion for fair trade clothing led her to actively participate in the third world boutique fashion show. In 2019, the ladies were able to appear in front of the public for the last time. Then came the corona pandemic. They were all the more eager to show again what can be bought and worn thoughtfully and without hesitation. Depending on the type, the clothes for the presentation were selected in advance, Blank said. “Models should feel comfortable in it.” It is important to speak to young people and to draw attention to the fact that less is more. “They shouldn’t go to ‘Primark’ to buy as much as they can, but consciously choose their clothes,” Blank pointed out.

“Honestly, it’s not my style of dress, but I still find it all interesting,” assured Anaya. After the first two preparatory meetings, she didn’t think her outfit was that bad. Lilly (13) can imagine wearing white linen pants and a blue and white striped shirt on vacation.

“I had never had my eye on fashion before, but after seeing everything here I thought it was awesome,” she said. Through her friend Mariella (13), Lilly came to participate in the fashion show. In any case, she loves fashion. That’s why Mariella immediately pledged her support.

With the rickshaw on the main street

Under the motto “Setting the pace of inclusion – without barriers to the goal”, an information event took place at the Altpörtel on the occasion of the International Day of Inclusion. Initiated by Brigitte Mitsch, president of the disability interest group and her friends (IBF), the institutions and organizations provided information on inclusion in general and opportunities to participate in social life in Speyer. Seats in the church rickshaw, with which visitors could be driven along the main street, were in great demand. Leon and Jonas, pupils of the Pestalozzi school, who came to the stand of the school’s current location in Berghausen in class size, were also enthusiastic. “Really cool, it’s really fun,” she said – an assessment that Mayor Monika Kabs (CDU) and Deputy Irmgard Münch-Weinmann (Greens) were then able to share.

On the city side, the office for the elderly, led by Constanze Konder, the neighborhood helper of Speyer and Alexandra Mika, the community nurse plus, who also organized the rickshaw, took part. They informed about their offers and opportunities to participate in social life in Speyer. Aktion Mensch, the IBF, Physiotherapie Neos, Special Olympics Rheinland-Pfalz and state inclusion guide Evi Weis also gave tips and suggestions for participation.

All participants satisfied with the good response of this day have already gathered for a round table on the topic of inclusion in Speyer. Some visitors spontaneously said that they would participate in the other activities planned by the group.

Seniors give advice to young people for life

“Don’t take yourself too seriously,” advises Hans, 89. Traudel, 82, advises: “Always be responsible in everything you do. For Christa, 91, the most important thing is: “Never lose your zest for life and Enjoy your leisure time.” Knowledge like this has been passed on to the younger generation by the residents of the Alloheim “Storchenpark” retirement home in Speyer. On photo boards, seniors take stock of what has been achieved, what has been postponed for too long or not addressed at all.

Many project participants would have wondered when dealing with their own lives: “Where did the time go?”, reports the director of the establishment, Markus Regenauer. Some looked back on fulfilling years, others would have preferred to do one or the other thing differently. Regenauer points out that seniors feel the need to let younger people benefit from their life experience.

“Part of our society lives in retirement homes. Everyone has their own history, hobbies and passions. What resulted was the experience of a long life, which the people of Stork Park wanted to share with those who may not be able to take stock for a few decades.

In a world that is spinning faster and faster, looking back is too often overlooked, says Regenauer, explaining the importance of the project. For a long time, people believed that they always had time, as one resident put it in a nutshell. Only later does it become clear that life is over. “Thinking about the past also means looking to the future,” says Regenauer, director of the establishment. The residents of Stork Park dared to do so.