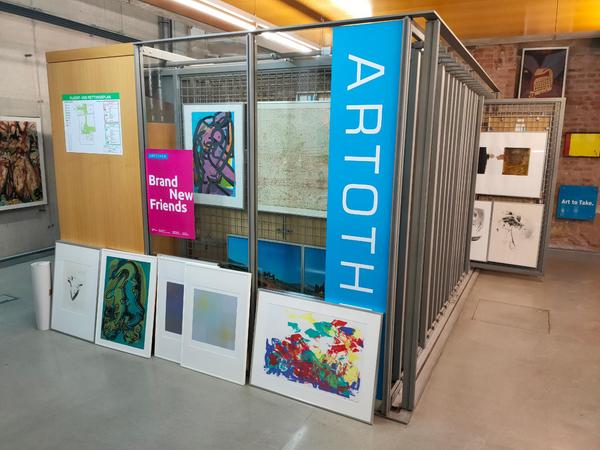 – Art to take away, literally: The Artothek in the city of Nuremberg celebrates its 30th anniversary – with a small exhibition and a new website. There’s some great art to borrow here, and it’s not expensive at all.

The largest and most expensive work is leaning against the wall, waiting to be picked up. “Reserved” is written on the huge acrylic painting by Peter Angermann, who in 1986 – ironically as usual – stretched a kitsch colored rainbow over the dark silhouette of a regional landscape. At some point, it has to go back up, right?

Market value of the canvas: more than 20,000 euros. The price at the Artothek: 12 euros. You can take the right piece (105 x 150 cm) home and hang it in your living room for three months as if it were yours. A real Angermann – compliments for the taste, the knowledge of the art! If you don’t like to hear that when visitors come…

And the facility that makes this possible cannot be praised enough, especially now, on a milestone anniversary. The Artothek in the city of Nuremberg has been available for 30 years – and in which this service, like in a real big city, has not aged a bit for citizens interested in art.

On the contrary: as the small anniversary exhibition above in the modern part of the Künstlerhaus shows, the Artothek collection is constantly being expanded and adapted to developments in the art scene through new acquisitions.

For the 30th anniversary there is not only an exhibition, but also a new internet presence.

Even hip Canadian pop singer Adam Green – a multi-talent with a comedic streak – is pictured with two small pictures that were only recently exhibited at the Bernsteinzimmer Gallery. Charming, the swarm of colors – and also an eye-catcher for young people.

Anette Stufler attaches great importance to the fact that there is something for everyone in the catalog, which today numbers around 1200 works of art. A stock like a real museum, at least in theory – you only ever see part of it. “80% are on their way,” Stufler says, “anywhere.” Because in addition to the works currently on loan, there are also images that need to be cropped, repaired or even restored.

Isn’t a star nail missing from Reiner Bergmann’s parody of the American flag made from scrap wood? “Yes, we still have to fix that,” sighs the boss, who is also a jack-of-all-trades and a maker to the hilt. And for three decades, his enthusiasm for art and artists has not been denied. Even if the kingdom of Anette Stufler is in the basement – here one dreams of wide horizons, the perspectives are dizzying. Even if the budget is small, a little something still works – if necessary, Stufler, who was born in Ingolstadt, sometimes dips into his own purse. Not only the customer should benefit from this, but above all the artists.

Even before the opening at the end of 1991 – in the Pilatushaus under the castle – the Artothek had existed for a few years as an association which also had the promotion of the regional scene in mind. The motto, then as now: “We acquire” – so that the money flows and the painters, sculptors and photographers can live better on site.

It all started with 120 works, with art conferences, exhibitions, workshops. “It was turbulent,” Stufler suggests when she talks about the beginnings of the Artothek. “The first thing I had to do was lather up the old brown carpet!” After stops at the Altstadthof (equally steep) and the Kunsthaus (3rd floor without elevator), the cast then landed in 2002 in the new open-plan Künstlerhaus building.

On the left the magazine with retractable mesh walls, on the right a box as an office, in the middle the active mistress of the photos, who always gives complete advice, even if she is only part-time. For the anniversary, she redesigned the website, photographed all the photos with a student, and asked her friend Gillitzer to give her a new design in pink and white. Artothek becomes: Art to take away.

The presentation of the most recently acquired images will continue through Blue Night on May 7, including an aerial mushroom piece by Berlin pop artist Jim Avignon, who will then paint live and perform music as a DJ. . It’s not far from Angermann’s Rainbow to the gay ‘Rainbow Prelude’ picture in the Zeppelin Grandstand: a cohesive, entertaining and clever run.